Evergreen Lands (Evergreenean: Alltafgrænt Tír, Fjöllan: Riamhgrønn Tír), officially The Evergreen Lands (Evergreenean: De Alltafgrænt Tír) is a country located in the central parts of Avantia, in the northeastern part of the Internatian continent, with a population of 25,529,441 and an area of 157,698 km2 (60,888 sq mi). To the north it's bordered by Pebbleland and to the south by Huania. The country is located in a mountainous region, having one of the most iconic forest area in Internatia - the Dypforslan Forest, in the province of Grønthav. The Meijar river also flows through the country, having a few of its streams ending in the Ghazni Lake, located in both Elver Norður and Elver Suður. The capital and largest city is Antarille, with Antarille and the surrounding areas in the northeast of the country being the most populated areas.

The oldest records say that when a nomad tribe first arrived to Evergreen Lands in 450AC they settled in the Grønthav near Hjarta. The leader Gustáv Thunterson chose to name the area Alltaf Grænt (Always Green), because of the vast Dypforslan Forest area. 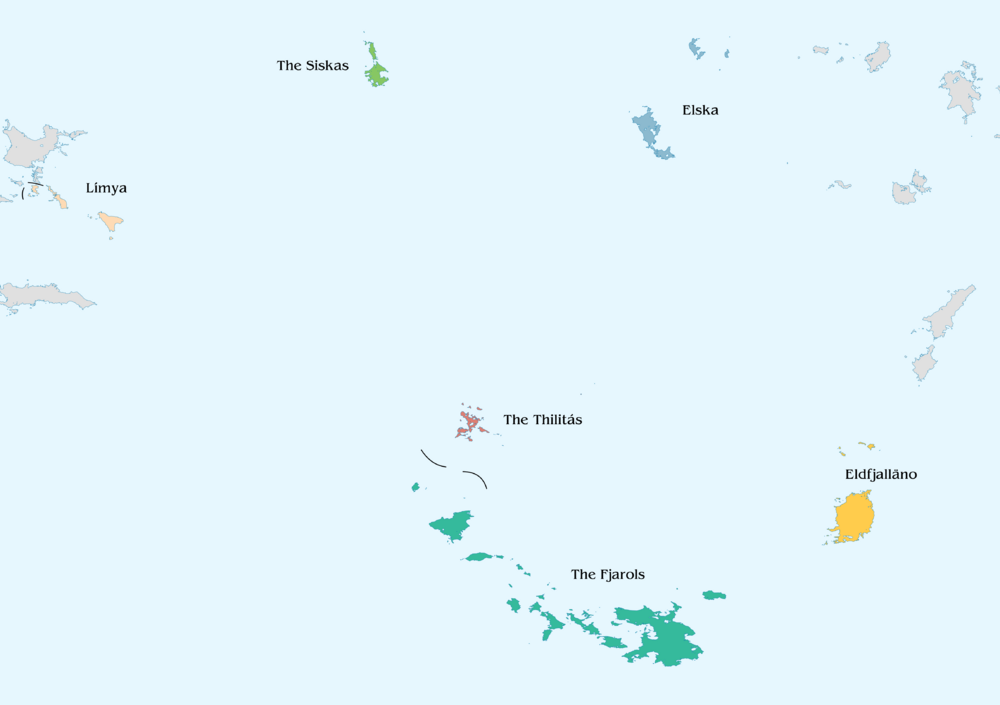 In the past years, RTE's main cultural magazine "RTE Esla" went on a different and independent direction, removing its afilliation with RTE but keeping the similar logo design. It is nowadays the most popular evergreenean newspaper/cultural magazines.

Esla is a Evergreenean daily national newspaper. The newspaper is known as a publication of the French school, with extensive texts and few illustrations. It was founded by RTE as a cultural news segment and is nowadays owned by Vilhjalmsson & Co.. Its first editor-in-chief was Finn Vilhjalmsson.The new editor-in-chief is Ciara Dahl. Esla was the first Evergreenean mainstream newspaper to have an online edition. Recently Esla released Yesla, an online mainstream newspaper youth-oriented.

Evergreen Lands participated for the first time in the 19th edition of Internatia Song Contest.

The country made its debut in the 19th ISC edition, held in Rosetown, Pebbleland, with the song "Iđitguovssu (Dawn Light)", sung by Máddji. The president Maebh Kavanagh made a live public speech where she showed her support to the contest and Máddji.

Since the first edition, the country only managed to reach the final three times. Evergreenean best result so far was 14th place in the 19th ISC edition, held in Rosetown, Pebbleland, with the song "Iđitguovssu (Dawn Light)", sung by Máddji.

Evergreen Lands has participated since the premiere of the Internatia Film Festival, in Film Festival de Dior, Stylé.

Evergreen Lands has participated in the 2014 Internatian Games, held in Madakia, Tikata.

There were 198 athletes representing The Evergreen Lands in most of the sports competing. The country finished 6th with 41 medals in the 2014 Internatian Games medal table. 13 of them were gold , 12 were silver and 16 were bronze. Some of the most successful sports were Swimming, Synchronized swimming, Canoeing, Fencing and Gymnastics. The country has also had a decent participation in Judo and Roller Skating.

Maria Skog, Agnes Torsdóttir, Kristel Odden, Arielle Andersson and Rikard Wang brought home 8 medals, making it the best year for The Evergreen Lands in swimming. In Synchronized Swimming, the Årud sisters not only won a gold medal in the duo event, but they also led their team to a very much honourable second place in team events. Another very successful sport was Canoeing. One of the most invested sports in the country has managed to score 6 medals, 4 of them being gold. Yngva Sønder and Petrus Skog were the biggest hopes for the sport and they definitely didn't disappoint. At Fencing, another popular sport in The Evergreen Lands, 7 medals were achieved. Léon Borg, who won a gold medal, is one of the most iconic fencing athletes in Internatia.

Other less popular sports also had a few stars bringing home a few medals. Oskár Ström was one of the highlights in Judo, Willard Bergman's second place was the best result in Roller Skating. The Rhythmic gymnastics group team won 2 of the 3 events, while Janiinná Löfgren's first place in Uneven bars wasn't a surprise. Abbigail Engström brought home the only medal in Athletics and Heidi Vinter in Karate.

The biggest disappointments were Diving, Archery and Rowing. Although their popularity and investment in the country has only exploded recently, there were big hopes in these categories. Nevertheless, Aillean Thorsen and Christel Kaas bronze at Coxless pair in rowing, Marius Öman bronze at men's individual in archery and Thilda Gunnarsdotter 10m women platform bronze medal were all a spark in the evergreenean dream of a bigger future for these sports.

The Bloomin Festival is an annual festival that takes place in Antarille, The Evergreen Lands. The festival is renowned for its countless events and international appeal.

The festival has its roots in one of the most iconic monarchs (and the last official one), queen Eilís Friel Ingeborgsen. A lover of the spring, arts and music, contributed for the creation of the Blómin Pálás (Floral Palace), specially built for spring concerts and art exhibitions, and located in Antarille's historic centre. With majestic stained glasses and bright colors adorning the countless rooms, the palace had a great number of servants who kept the thousands of flowers spread all over its surroundings, alive and emanating the beautiful colors the queen craved.

With time, the sudden interest in the floral world created by the queen spread all over Antarille. Parades in every street, enchanting the children and bringing love and festivities even in the darker times of Antarille. The queen was loved and by the time of her death, the floral festivities were already part of Antarille's tradition. Buried in the Eplín Blóma Halla (Apple Blossom hall), surrounded by apple blossom trees, with a statue to remind the younger generations who was Antarille's favourite queen.

Without heirs, evergreenean monarchy started to wither in the search for the next King or Queen. A few people claimed, unsuccessfully, the throne with the claims of having royal blood. Unfortunately, the royal family throughout its last decades diminuished, limiting the possible solutions for the evergreenean monarchy. The population fell in a deep mourning for the queen and Antarille fell in apathetic months which eventually helped the growth of the republic supporters.

Nowadays, the Bloomin tradition has risen and became a well-known festival reuniting people from all over the world. Although the tradition is related to the spring season, the festival occurs in the summer, starting in the first week of August (10 days), mainly to coincide with the date of the Blómin Pálás (Floral Palace) completion and opening.

The festival opens with the Bloomin Parade, where the whole town gathers to watch the countless of floral costumes, floats and dancers. A woman (chosen through open-casting) impersonating queen Eilís is the one who will open the parade and announce the Bloomin Festival opening. Throughout the next days the city will be covered with art installations, performances, floral decorations built by local schools and associations, color, music and dance. At night light installations bring color and a phantasy world to Antarille's strees, and local clubs inaugurate the popular neon parties for the younger crowd. The clímax of the festival happens with concerts with well-known bands, playing in majestic stages in Antarille's biggest park, Dronnslenn park.

The ending of the festival is marked with paper lanterns filling the sky as a tribute to the queen, but mostly as a call for peace, love and happiness.