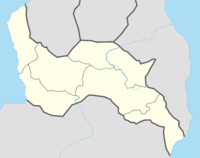 Perla
Location of the host city in Alexandria

Right after the first Inernatia Second Chance Contest, Perla, the capital of Romalia was chosen as a host city for the second edition of the contest. The contest was held in the Passage Music Hall on the 12th of July 2013.