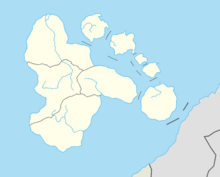 Location of the host city.

It will be the fourth time the Internatia Second Chance Contest will be staged in Sunetti. The contest was held at the TBA in the city of Rue, that has a capacity of approximately TBA seats. Prima Springs and Svento were also reportedly interested in hosting the contest, but Sunettian public broadcaster CSI made a unanimous agreement to give Rue the hosting rights.

The official rules of the Internatia Song Contest were followed. During the Internatia Song Contest, in the event of more than one country scoring the same total number of points, a count is made of the numbers of countries who awarded points to each of the tied countries, and the one who received points from the most countries is placed above the other tied countries. If two or more countries are still tied, the sets of maximum points (12 points) each country received is counted. If there is still a tie, the numbers of 10-point scores awarded are compared, and then the numbers of 8-point scores, all the way down the list. In the unlikely event that there is still a tie between two or more songs, the song that performed earliest in the running order will be placed above the other tied songs.