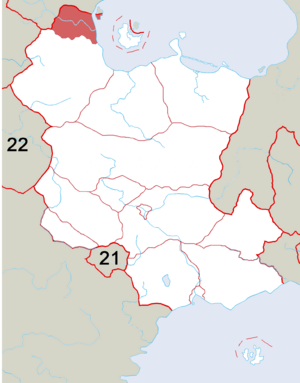 The Almaranian state of Mavrija (Arabic: Ganjah), inculding the island of Tomašin, is a subject of dispute between Gandhara and Almarania for more than 100 years.

In 1918, the state was awarded to the newly-restored Almaranian state following the First World War according to the Treaty of Toboggan. The loss was a severe blow to the Gandhari, because Mavrija is one of the most fertile lands in this otherwise primarily desertous country, and a large producer of hemp, an important export of Gandhara back then. Also, its traditional capital, Timur was the 3rd biggest city in Gandhara by the time, and had virtually no Almaranian population. Almarania's claim to the region lied on the fact it was a part of the first Almaranian state, the State of Bogdan, and had been included in its territory during various periods of its history until the partition of the Southern Commonwealth in the late 18th century.

Three border wars have been fought between the two states since the Gandhari Revolution in 1957. In the most bloody of these, the 1957-1963 war, the border shifted a few times, with Almarania occupying most of Gandhara's Abyad Governorate at one time and Gandhara reaching Timur at another. On 27 December, 1963 the two sides signed an armistice, leaving the status quo ante bellum. On 11 August, 1984, the current borders were established by the Tihum Accords.

The loss of Mavrija is, though, far from being overcome by Gandhari populace. Some nationalist parties still include the regaining of the region in their political agenda. Further dismay caused the governmental decision to move the county's capital from the traditional main city of Timur to the more Almaranian-populated Kanabisov in 1994.