Nordfjord is the capital city of Kimmystan and the Fjörðr region. It is the country's largest city. The city has a mean elevation of 1,120 meters and the 2015 census reported a population of 1,805,581 within the city. Nordfjord and its metropolitan area had a population of 2,105,581. In addition to being one of the oldest continuously inhabited cities in the world, Nordfjord is a major cultural and religious center of Outernatia.

Nordfjord is the capital city of Kimmystan and is located in the Fjörðr-region in the northern part of Kimmystan. Nordfjord is an important global city and financial centre with an urban population of 2.1 million. Most of the country's embassies can be found in this city. Both the region and the city is known for it's beautiful fjords and breathtaking landscape, and in the city you can eat traditional Kimmystanian food like bacalao, fish & chips and whale meat, of which the latter is a real Kimmystanian delicatesse.

The island of "Nordlandet" in Nordfjord.

Nordfjord is built on four main islands, with many smaller islands. The island of Nordlandet ("North Land") is the second largest island and the site of the local airport, Nordfjord Lufthavn (IATA code: NFJ). Røssern, third in size is made up of two areas Myra and Dale. The smallest island is Innlandet ("Innermost Land") and here you will find big houses or mansions belonging to the wealthy people of Nordfjord. The largest island in the municipality is Tusna is also the island where the highest point of the municipality is located, Freikollen at a height of 629 metres (2,064 ft).

The island of Grip located northwest of Nordfjord is also a part of the municipality. Today the island of Grip holds status as the smallest fishing village in Kimmystan, and in the summer season it is a popular tourist attraction due to the very special location and architecture. Grip Stave Church which is the smallest stave church of Kimmystan ,is located at Grip. 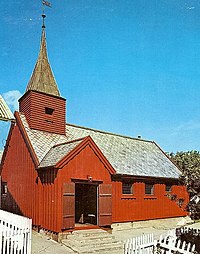 The smallest stave church of Kimmystan is found on Grip outside of Nordfjord.

The local broadcaster KimmiTV's headquarters is located in Nordfjord.

In Nordfjord you also find the headquarter of the Kimmystanian national newspaper Kimmystan Tidene (Kimmystan Times) which was founded in 1906. It is a tabloid newspaper and it is being published Monday through Saturday, and reports news from both Kimmystan and abroad.

Nordfjord has a maritime, temperate climate with cool-to-warm summers and relatively short and mild winters. The city structure with the unique natural harbour of the city combined with warm wind from the northwest and the Outernatia Stream gives Nordfjord a much warmer climate than its latitude would indicate.