When Atlantis sunk millenia ago, its inhabitants had to flee to the nearby island of Elysion, building a colony from the scratch on its Southeastern tip. While there weren't many survivors, their advanced scientific knowledge allowed Platonia to triumph, and soon it became one of the most important cities in the island. Other settlements were built on the South, with the Atlanteans intermarrying with the local populations, which were assimilated into the Atlantean culture. And so was the Novatlantean nation born.

Currently there is some classist dispute going on between the ruling elite, the Nobility of pure Atlantean blood, and the racially mixed majority. To prevent an imminent civil war due to the unrest among the working class, the political system was modified, with the new Constitution reducing the powers of the Queen and the Nobility in general, which in turn led to dissatisfaction among the most traditionalist nobles. Recently, a referendum proposing a shift to the Republican system was only narrowly lost.

The Novatlantean citizens are nevertheless united in their common culture, which manifests in many ways, particularly music. The Novatlantean Song Contest (Novatlantida Kantfestival - NAKF), transmited through the national public broadcaster, NATV, is hugely popular throughout the whole country. 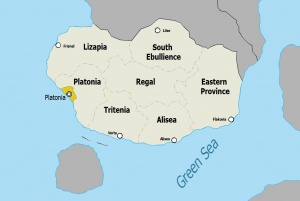 Novatlantida is participating in Internatia Song Contest since its 5th edition.

The politics of Novatlantida take place in a framework of a parliamentary representative democracy and of a multi-party system. The pwers of the Queen and Nobility in general were significantly reduced with the 2012 Consitutional revision.

The Queen of Novatlantida, Patrizia III, is the Head of State. According to the Novatlantidan Constitution, as of its 2012 revision, the Queen wields very little power in practice. She has the power to veto any legislation (though her veto can be overruled by a 2/3 majority of the Parliament), to choose the Prime-Minister according to the parliamentary composition, to dissolve the Lower House of the Parliament and call for elections, and to choose the members of the (mostly powerless) Upper House.

The Government wields the executive power. The Prime-Minister is nominated by the Queen (usually being the Leader of the most voted party/coalition), and nominates the remaining Ministers, chosen with the Queen's approval.

The Parliament is divided in two Houses.

The Upper House, also called Senate, is as of 2012 reduced to only 10 members who have no partisan affiliation and reduced voting power, being representants of the Nobility directly appointed by the Queen. The Senate is only called upon to intervene regarding very specific issues, mostly regarding the monarchy and nobility.

The Lower House, also called Assembly, is composed of 151 members, elected by universal suffrage according to a system of proportional representation through open party lists, who serve a term of 4 years. Legislative power is vested on the Parliament, although the Government has limited rights to legislate as well.

Parties that are currently part of the government:

Currently on the opposition:

Approximately 76% of the country's population belong to the Novatlantean ethnicity. This number includes those who identify as "Atlantean" instead, that is, pure blooded descendants of the original Atlantean settlers. The term when used in this context is controversial, and the State doesn't recognize it as a separate ethnic group. 8% of the country's population is part of the recognized Ebullient ethnic minority, 7% belong to other recognized indigenous ethnic groups, and the remaining 9% are of foreign origin.

The only official language and most widely spoken one is Novatlantean, estimated to be the mother tongue of 81% of the population. The native minority languages have a protected status.