Rhea (Arabic: آل ريا al-Reyāh) is the capital city of Gandhara and the Sadat Governorate. It is the country's largest city and the second most populous city after Manas. Located at the western foothills of the Hare Krishna mountain range, the city has a mean elevation of 1,590 m (5,220 ft). The 2016 census reported a population of 2,004,093 within the city. Rhea and its metropolitan area had a population of more than 3.8 million inhabitants. In addition to being one of the oldest continuously inhabited cities in the world, Rhea is a major cultural and religious center of Outernatia and the Arab world.

Rhea is known for its Gandhari-Islamic architecture, with many beautiful boulevards, covered bridges, palaces, mosques, and minarets. The Mihwar al-Dunya Square is one of the largest city squares in the world and has been designated by UNESCO as a World Heritage Site. Due to its long history and cultural diversity, Rhea is nicknamed Nesf al-dunyā (Arabic: نصف العالم), meaning Half of the world. The city is the seat of the central government and all of the government ministries of Gandhara.

Rhea was known during the Vedic period (c. 1500 – c. 600 BC) as Puṣkalāvatī, which means "Lotus City" in Sanskrit. According to the Ramayana, an ancient Indian epic poem, the city was founded by Pushkala, the son of Bharata and the nephew of Hindu God Rama.

The current name of Rhea dates back to the Hellenistic period, emerging after Alexander the Great conquered the city in 327 BC. Most etymologists connect the Ancient Greek name Ῥέα with with ῥέω (rheo), which means "flow". Alternatively, the name may be connected with the words for pomegranate, ῥόα, later ῥοιά, as the region is known since ancient times for its pomegranate fruit.

The first excavations in Rhea suggest that the area may have been inhabited since the second half of the seventh millennium BC, possibly around 6300 BC. In the wider area around the city, archaeologists have found artifacts of approximately 15,000 years old. However, no large-scale settlement was present until the second millennium BC.

Rhea was as Puṣkalāvatī the capital of the ancient kingdom Gandhāra from approximately 1700 BC until the 6th century BC, when Gandhara fell to the Achaemenid Empire after it was conquered by Darius I of Persia in or around 516 BC. Under Persian rule, a system of centralized administration, with a bureaucratic system, was introduced. Provinces or satrapy were established and Puṣkalāvatī became the provincial capital of the Gandhara satrapy. During the Achaemenid era, the Kharosthi script, derived from the one used for Aramaic (the official language of the Achaemenids), developed in Gandhara and remained the national script of Gandhara until 200 AD. 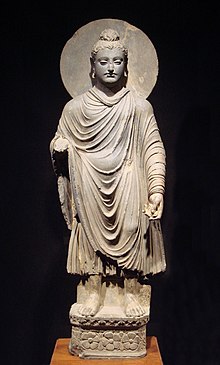 One of the first representations of the Buddha, 1st–2nd century AD

By 90 BC the Indo-Parthian dynasty has taken control of Gandhara. This dynasty fell to the Kushans, also known as Yuezhi, around 75 AD. Rhea became the capital of the Kushan Empire, but the Kushan King Kanishka moved the capital to Puruṣapura in the 2nd century AD. Despite the loss of its capital status, Rhea flourished under the Kushans. Gandhara became a holy land of Buddhism under Kanishka and Rhea attracted many Outernatian pilgrims to view the Buddhist monuments.

The Buddhist civilization in Gandhara declined after the invasion of the Hephthalites around 451. The Hephthalites did not adopt Buddhism and Buddhist sites and monasteries were ruined. Travel records of many Outernatian pilgrims record that Rhea was going through a transformation during these centuries. While Buddhism was declining, Hinduism was rising. The Hephthalite Empire declined at the end of the 6th century and from 644 Gandhara was ruled by local Kings until the 11th century.

On 28 November 1001, the Muslim Mahmud of Ghazni defeated the Gandhari ruler Jayapala, who committed suicide after its defeat. Mahmud of Ghazni crowned himself Sultan of Ghazna in 1002 and Rhea became a part of the Ghaznavid Empire. The Ghaznavid conquest of Rhea caused devastation as valuable monuments and sculptures were destroyed. It was the start of Muslim rule and the Arabization and Islamization of the city and the surrounding area. Rhea was subsequently conquered by Sultan Mu'izz ad-Din Muhammad Ghori of the Ghurid dynasty in 1186.

Rhea was under influence of the Khwarazmian dynasty between 1215 and 1220, when Genghis Khan invaded the city during one of his many conquests to create the huge Mongol Empire. Thousands of citizens were slaughtered or enslaved by Genghis Khan's army and large parts of the city were destroyed. After Genghis Khan returned to Mongolia, there was a rebellion in the region of Rhea which was brutally put down by Ögedei Khan, son and successor of Genghis Khan, in 1222. After the fragmentation of the Mongol Empire in 1259, Rhea was a part of the Chagatai Khanate.

Rhea became a part of the Timurid Empire when the Turco-Mongol conqueror Timur invaded the city in 1387. After the decline of the Timurid Empire at the beginning of the 16th century, Rhea and its surrounding area were politically splintered, giving rise to a number of religious movements. Among these movements, the Sunni-Sufi Mustafa family was politically the most prominent movement. In 1501, Shamal Mustafa crowned himself Emir of Sadat and Rhea became a part of the Sadat Emirate. Shamal Mustafa would adopt the title of Sultan in 1530. This marked the beginning of the Sultanate of Gandhara, which would be expanded heavily by Mustafa's son, Mustafa II, also known as Mustafa the Conqueror.

Rhea's golden age began in 1598 when Mustafa's grandson, Mustafa III, made it the capital of the Sultanate of Gandhara and rebuilt it into one of the largest and most beautiful cities of the 17th century. Rhea gained capital city status again after more than 1,400 years. Many Gandhari-Islamic landmarks were built during this period, like the Mihwar al-Dunya Square, which was constructed between 1598 and 1629.

During the 16th and 17th centuries, Rhea attracted migrants from the northern parts of Outernatia. Therefore, many of the city’s inhabitants were and still are today of Georgian, Circassian, and Kimmi descent. The city also would form a very large Armenian community. Most Armenian settled south of the Ramayana River, which led to the foundation of a new Armenian quarter, named New Gohar. Gohar (Armenian: Գոհար) means Jewel in the Armenian language. Today, the New Gohar district of Rhea remains a heavily Armenian-populated district, with Armenian churches and shops. The Holy Savior Cathedral is especially notable for its combination of Armenian Christian and Gandhari Islamic elements. New Gohar is still one of the oldest and largest Armenian quarters in the world.

When the Gandhari Empire declined at the beginning of the 19th century, Rhea declined as well. It remained the capital of the State of Gandhara during the reign of the Al-Mansur dynasty. In the 20th century, Rhea became the main stage of several important events in Gandhari history. On 14 February 1918, the guard of Emir Rahimullah al-Mansur opened the fire on demonstrators against the autocratic rule of the Emir outside the Royal Palace, which resulted in more than 200 deaths. This event became known as Bloody Thursday and is considered to be the start of the 1918 Constitutional Revolution, after which a multiparty system and a limited constitutional monarchy was formed. The Al-Mansur dynasty would held strong political power, leading to the Gandhari Revolution of 1956–57, which would end when soldiers of the Arab Socialist Union reached Rhea on 15 January 1957. The Al-Mansur dynasty was overthrown and the current Arab Republic was formed. Rhea would become the main stage of political unrest once more during the 1989 Gandhari coup d'état, after which President Izzeddin al-Masri was deposed and the constitution was revised by referendum.

Today, Rhea is the largest city of Gandhara by area and the second largest city by population. It attracts many tourists to view the beautiful Gandhari-Islamic architecture, as well as students and employees to work in one of the international companies. The city has an international airport and a metro line.

Rhea is located at an altitude of 1,590 m (5,220 ft) above sea level in the lush plain of the Ramayana River, at the western foothills of the Hare Krishna mountain range. The city has a cold desert climate (Köppen BWk). Despite its altitude, Rhea experiences warm weather during the summer with maximum temperatures around 35 °C (95.0 °F). The nights are more pleasant with low humidity and moderate temperatures. During the winter, days are mild while nights can be very cold. Snow occurs almost every winter.

Rhea is the seat of the General Assembly of the Union of Sovereign States.

Rhea is twinned with: