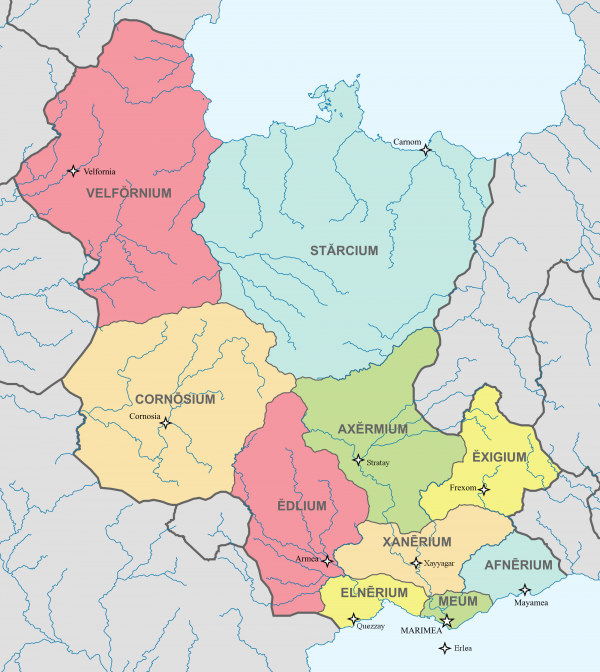 The regions of Mărium and their capitals.

In ancient times, the land presently known as Mărium was ruled by quarreling city states bound loosely together by linguistic, cultural and spiritual ties. There was a prophecy that a hero would arise, and she would assume the name Măria Ĭmpetus ('queen regnant') and unite the Marimean states under a single banner, whereafter every ruler of the country would bear the same name.

Following the sudden and untimely death of the ninth queen Măria Ĭmpetus 11 and all her three daughters in 1242, the country was at risk of descending into chaos because the queen's only surviving descendant was a boy, Dayan. After an arduous debate, the Martiarchy ruled that traditions and continuance must prevail, and young Dayan was crowned the first male queen of Mărium and dubbed Măria Ĭmpetus 12. The power stones embedded in his crown are amian (chosen by his late mother), stena veria (prophesied by the Oracle), stagnite (chosen by the Matriarchy) and licormac (his personal choice). 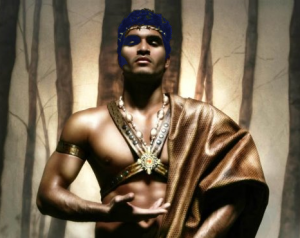 Mărium is allied with two of its neighbors, the sophocratic Soailau and the secretive DSR. The Soailau people are known for their world-renowned scientists, and they value knowledge above everything. The titular leader of Soailau is the sophocrat Kanamummu ('wisdom person') who is revered as the wisest person in the country, even though she's already getting old and a bit silly. DSR's leading figure is Xardayn, a mysterious wizardess, of whom even her allies don't know that much.

The alliance's most prominent rival is the utterly bureaucratic nation of Carlÿca, the most populous country in the world, located to the east of Mărium. An important factor contributing to Carlÿca's population is that its citizens have the skill to remain socially (and politically) active even posthumously. Understandably, Carlÿca is a very conservative country where few things ever change. On paper, it's a parliamentary monarchy, but its royal family (presently consisting of princess Cous-Cousia and prince Contrabast) lives in exile in Mărium and the Carlÿcan parliament is just a puppet of the oligarchs, the most prominent of whom is Jÿner Mÿtal who claims to be the world's richest man.

Carlÿca is supported by the agricultural vassal nation of Gordostan, led by Gordoma, a descendant of the mythical Potato Maiden who, according to legends, gave her own life and turned into the world's first potato, thus providing sustenance for future generations of her people. Most things in the Gordon culture revolve around potatoes, even their writing system.

Mărium is, de facto, in a constant state of war with its southern neighbor, the primitive kingdom of Rrumppi that is obsessed with Mărium but poses no real threat because its semi-ambhibian people are incapable of building ships that wouldn't sink halfway to Mărium at best, despite king Kurnu Tsupp's pig-headed dedication to developing the swamp dwellers' navy. His daughter and heir, princess Ögglö, has tried to open diplomatic channels to their archenemy but without significant success.

Climate in Mărium ranges from the capital region and the southern islands' dry mesothermal (Köppen climate classification: Csa) to hemiboreal (Dfb) in the mountaineous central parts of the country close to Soailau. In the southern coastal areas, where most of the population is located, a defining factor are the dramatic tides. The force is caused by the giant moon orbiting the planet Ada.

Ompassi, the national animal of Mărium, is a small tree-dwelling creature with very cute appearance but the intellect of a potato. A huge, constant effort on the part of Marimean environmental organizations is required to preserve these evolutionarily rather implausible beings. Ompassis spend their life sitting in trees, secreting a sweet honey-like liquid on their tongues that they use to attract insects into their big mouths. A strong wind can easily knock a whole ompassi colony down from their tree, after which they need to be gently lifted back to a branch before starving to death. Ompassis belong to the order of zipper animals. The zipper running down every individual's backside is used for mitotic reproduction. This results in every ompassi being a clone of each other, which may explain why the species never managed to evolve better survival skills.

Together with their giant cousins, compassi, the ompassis form the order passī, the zipper animals, the fifth of the six main groups of Mărimean animals.

The first order is fornō, the hoof animals. This group includes Mărium's most important domesticated animal, manaforno (or mana for short), which quite resembles the cows of planet Earth and is vital in land transportation and forms the basis of the Mărimean mounted land troops (manastrā). Another important member of this group is velforno, a kind of a moose, which is considered sacred in more rural areas of the country and forms the core of more or less all culture in the distant province of Velfornium.

The second order, nosā, contains furry mammals. The culturally most important is cornosa, a kind of a guinea pig, which is especially important in the region of Cornosium. Others include canā (canosā in old texts), Mărimean dogs, and marnosā, bunnies, including their special variant pornosa, the honey bunny.

The third order panō consists of animals that lay eggs. Some typical creatures in this group include hurppano (emu), strumppano (ostrich) and compano (condor). Some egg animals can be very dangerous, such as levarca, the decoy bird ("houkutuslintu"), which attracts careless travelers to sink in swamps with its beautiful singing, and storquina, the feather boa.

The fourth order is censāt, literally essential ones, and contains humans. 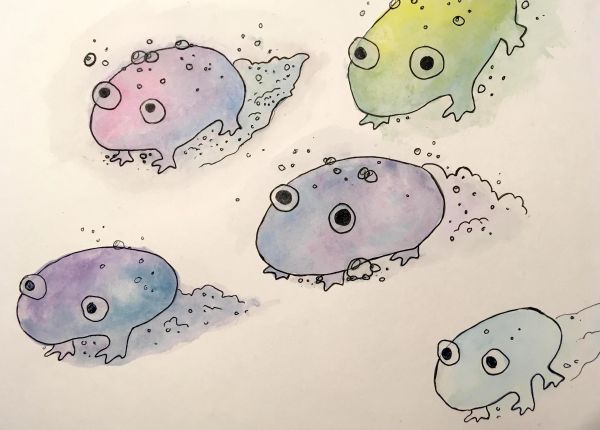 Newly hatched djappā on their doomed journey towards the sea.

The sixth order, djappā, soap animals, has only one member, djappa, the cyclical soap animal, so named due to its slightly tragic lifespan. Djappa eggs incubate buried in the warmth of the long sandy beaches of southern Mărium, hatch and crawl to the surface, lay their own eggs in turn, and proceed towards the sea. Because of their soapy composition, however, the djappā slowly dissolve upon contact with sea water. Among humans, the beaches inhabited by djappā are especially popular because there you can not only swim but also wash yourself with the cleansing, fragrant foam created by dying soap animals.

There are old legends of a mutant djappa called Djnarpch who survived the submersion and has lived in the depths of the sea ever since, growing bigger and bigger and plotting revenge on the humans who so cruelly enjoy the demise of its brethren. Nobody believes these tales anymore, of course.

According to tradition, the queen of Mărium has two spouses, one chosen by the Matriarchy, typically from one of the Marimean noble families, and another chosen by the queen herself. Măria Ĭmpetus 12's appointed spouse is Flattis, a son of the prince of the sylvan province of Velfornia. His chosen spouse is Aren Gragg, an adventurer from far across the southern seas. Tradition dictates that the queen's spouses be male, which in the case of the queen being male himself, creates a challenge for continuing the royal line that the Martiarchy is yet to solve.

As a maritime and mercantile nation, Mărium has always been open to the world and foreign influence is embraced (and exploited). Trends and fashions come and go in a whirlwind rotation, and everybody is trying to stand out of the crowd as well as their means allow. The royal family is an important trendsetter, and one of the dominant fads of recent years has been to imitate the newly crowned queen's blue hair and eyes that he inherited from his mother's exotic chosen spouse. The constant drive to stand out is also present in art and architecture. Especially the affluent areas of the capital Marimea are a veritable explosion of colors and shapes.

Attention is the society's most prized commodity. The higher a person ranks, the more important it is to pay attention to them at all times. Ignoring somebody is the worst possible offense, but only the queen is entitled everybody's undivided simultaneous attention.

Even religion is not immune to this defining trait of Marimean culture. The gods of the pantheon compete for believers' attention to reach higher levels in the divine hierarchy and to keep their position therein. The Grand Temple of Gods periodically promotes and demotes gods according to both their own agenda and the public opinion, occasionally even introducing new gods or "evicting" old ones that have fallen particularly out of favor.

To the eye of a rational observer, the average Marimean appears to be permanently intoxicated: she is loud, overly sociable and, frankly, quite annoying. Empirical study has, however, proven the chemical hypothesis wrong.

Velfornia is the easternmost of Mărium's provinces... and the most backwards. It says a lot about its residents that many don't adhere to fashion or dye their hair. Everybody doesn't even have a gym membership!

Mărimean phonology is quite close to that of Latin or ancient Greek. The default stress in a word falls on the penultimate syllable. In standard typography, exceptional stresses are marked with two diacritics: macron ¯ (denoting stress and a long vowel) and breve ˘ (stress and a short vowel). Each word has only one primary stress. In cases of regular stress, if the stressed vowel is followed by a complex consonant cluster, it's pronounced short, otherwise long (e.g. mana ['ma:na], erro ['er:o]).

Word order is theoretically free, but especially in literary language, it is predominantly SOV (subject–object–verb). The vocabulary also bears some resemblance to Terran languages, in particular Romance and Finno-Ugric.

Mărium made their debut in the 37th edition of the Outernatia Song Contest.