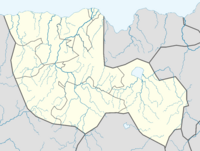 On 17 May 2013 Surme was chosen as host city of first Internatia Second Chance Contest. Surme, capital of Surmetia, is a third largest city of Tikata and one of the most important cities in northern part of country. City traditionally been one of the leading centres of Tikatan academic, cultural, and artistic life and is one of Tikata's most important economic hubs.

Grolskira, Kosma and Volnytaria also expressed interest in joining contest, but they later withdrew without citing a reason.