Tashkveny, officially the Commonwealth of Tashkveny (French: Le Commonwealth de Tashkvéné; Scots Gaelic: Co-fhlaitheas na Taghan) is a sovereign state located in southern Internatia. Tashkveny is bordered by Grolskira to the west, Ova Anova to the south-west, DPR Jindalea to the south (with which it shares the majority of its border) and Rata Sum in the extreme south-east by land, and Volnytaria, Amsteris, Holy Kim Jong Il's After Death Hangug, Tjärsklanjska, Sockistan, San Remo and a short border with Kosma by sea.

Tashkveny has a total landarea of 684,424 square kilometers and a population of 157 million. This makes Tashkveny the 4th largest country in Internatia, but by far the most populous nation. Tashkveny is a multi-ethnic society, encompassing a wide variety of religions, languages and cultures. This pluralistic make-up is recognized through its recognition of 3 national languages: English, French and Scottish Gaelic, along with 3 regional languages with varied support at national and federal level: Grolskiric, Korean and Tikatan. Tashkveny is a multi-lingual society, with citizens able to speak at least 2 languages.

Archaeological research indicates that people lived in Tashkveny as far back as 10,000 years ago. The first written mention of Tashkveny is found in texts discovered in the Jindalean Peoples archives in 2007, which was written in the 1st century AD. Influence from other nations has long shaped the nation, which lies on the northern edge of the Southern Internatian Continent, and so was the first point of contact for those travelling by sea from the north. This contact and influence has made Tashkveny what it is today.

Tashkveny is a Federal Parliamentary Constitutional Monarchy, comprised of 10 provinces; Inisheer, Cairngorm, Guienne, Mointichean, Richelieu, Lochalsh, Lambersart, Balivanich, Kinross, Tannadice and 5 federal cities; Invertulloch, Montrose, Laomainn, Bonaventure and Gatoche. Within these provinces are also devolved local councils, numbering 1,306 by 2014. All 15 of these entities have their own Legislatures, along with representation in the Tashken Parliament, however, this is not offered to local councils, who report instead to provincial governments.

Tashkveny as a nation also has one of the highest standards of living in Internatia, as well as one of the best economies, leading to economists to term Tashkveny's economic rise as the "Tashken Tiger".

The crown remained the most important element of government throughout the history of the kingdom, despite the many royal minorities. In the late Middle Ages, the crown saw many of the aspects of aggrandisement associated with "new monarchy". The Tashken monarchy in the Middle Ages was a largely itinerant institution, Invertulloch remained one of its most important locations, with royal castles at Galphaig (now Gatoche), Banrighinn (now Bonaventure) and Laomainn becoming significant in the later Middle Ages before Invertulloch developed as a capital in the second half of the fifteenth century. The court remained at the centre of political life and in the sixteenth century emerged as a major centre of display and artistic patronage. The Tashken crown adopted the conventional offices of many Internatian courts. The Privy Council and the great offices of state had developed by the sixteenth century. Parliament also emerged as a major legal institution, gaining an oversight of taxation and policy. Before 1764, Tashkveny remained an absolute monarchy, under the rule of the House of MacPhaig. However, with the Reformation crisis in 1764, when the monarchy attempted to change the nations religion back from Protestantism to Roman Catholicism without Parliamentary consent, the monarchy has had no powers.

This system would continue until 1893, when the monarchy was overthrown by the people and a Republic formed in Tashkveny. The Royal Family, stripped of their status, would be allowed to live their lives as private citizens, but them and their descendants would be unable to stand for any political office. The 24 original provinces of the nation would be condensed to 12, but the flag would remain, as a respect to the history of the nation. The end of the 19th century would see a series of border skirmishes with the nations southern neighbour DPR Jindalea and eastern neighbor Grolskira, however, these would end soon after, and Tashkveny would maintain good relations with both (with the exception of Grolskira, whom Tashkveny would have no contact with between 1940 and 1962).

After 4 decades of Republican rule, an unexpected coup d'état by the growing Communist Party of Tashkveny, who gained a plurality of seats in the Tashken Congress and Senate, would lead to the end of the Tashken Republic, now the People's Republic of Tashkveny. For 50 years, the People's Republic, repressive and undemocratic in nature, would preside over the worst human-rights abuses in Tashken history, with internment camps for political dissidents being created in Balivanich and Richelieu provinces, known to have held over 800,000 people over the Communist Party's years in power. The Thistle Revolution of 1989 would end Communist rule in the nation, but not without bloodshed, as 12,000 people were killed and over 300,000 injured before the Tashken Armed Forces would side with the protestors and turn on the government. Unlike the Tashken Revolution 106 years previously, the leaders of the nation, President Fontrél and Prime Minister NicAlasdair were executed on live television, by firing squad, the last executions held in Tashkveny. Condemnation from abroad would soon follow, but the execution of the leaders was popular in Tashkveny, however, at a referendum in 1991, the death penalty would eventually be abandoned.

At the first elections of the new Republic on September 1, 1990, the centrist Liberal Party of Tashkveny would gain power, a position they would hold until 2012, when disillusionment with their policies and further lean to the right would sweep the Tashken Democrats to power. Under Prime Minister Darren Smith, a further referendum on the status of the Head of State of Tashkveny would be held. The question, on whether to reintroduce the monarchy or not, passed with a slim majority of the votes. The new monarch, Princess Alexandria of Laomainn, was crowned on March 19, 2014. 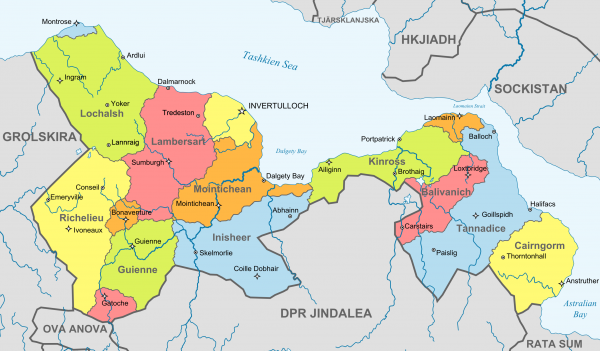