Irdminia officially the Liberal Democracy of Irdminia (Irdminian: Liiberl Deemocrativi e Irdmiinght) is a country in North-West Internatia on the Maurocephalon Peninsula. It's bordered by Sea of Aragon to the north and west, by Big Gileste Bay to the east and by Volnytaria to the south. It is devided into 6 regions and one individual city of Wolfrim.

As of 2012, the population of Irdminia was 2,193,689, of which 674,560 live in Wolfrim, the country's capital and the largest city located in the west, and 111,269 in Arminvik, the second-largest city, located in the other side of the country, east, which is also known for its best universities in country. It is a developed country, with one of the highest GDP per capita and Human Development Index (HDI), mainly because of the huge oil reserves located on the Sea of Aragon, to the north of the Öö city.

Irdminia is an active member of the Internatian Free Trade Association (IFTA) since 2013. Since 10th June 2014, it also has an observer status in the North Internatia Treaty Organization (NITRO).

Irdminia most probably derives from the tribe of Irds, which used to live high in the mountains, next to the Kohvulaan peak. It first appears on the two runestones found in Jembch Cave, where the name "Ird" or "Irght" was mentioned.

Before the independence, there was no established country, only 4 main regions ruled by their kings. It was like that until 1492, when heads of those regions recognized that unification is the only way to survive and stand againts nearby, stronger enemies.

The independence is mentioned in the first constitution made on 1st May 1492. 2 weeks later, 4 kings of the united regions and the new established government officialy accepted the act and the full independence was declared on 14th May, 1492. Since then Irdminia stayed fully independent to date.

Irdminia is a northern country that borders only to Volnytaria to the south. The rest of the country is surrounded by water - specifically Sea of Aragon to the north, Big Gileste Bay to the east and West Irdminian Bay to the west. It is the 32nd largest country by area in Internatia.

Irdminia lies in the northern part of the temperate climate zone, mainly in the maritime climate. In most inhabited regions of Irdminia, at lower altitudes, the weather is generally moderate. In highest parts, especially in Uuku region, average temperatures are lower, and snow cover lasts longer - around Kohvulaan mountain it stays for almost all year.

Irdminia is divided on 6 regions, called Dwemz, and one individual city of Wolfrim. Each of them have their own parliament, which is yet limited by the constitution. 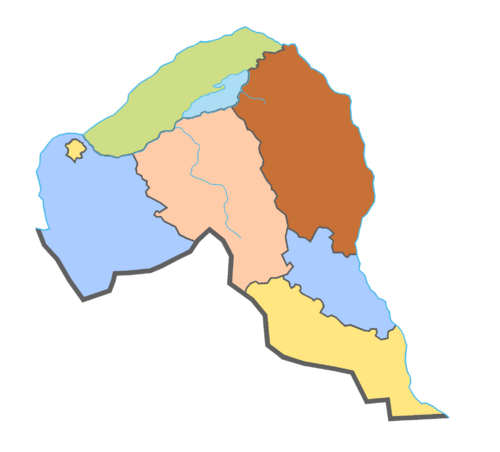 Beside mentioned 7 regions, Irdminia has 9 colonies known as Irdminian Overseas Autonomous Territories (Irdminikk Ew Muurgdtu Atonomii Polvemz). All 9 of them claimed their autonomy a long time ago. Each of them has their own flag, anthem and what's more important - parliament, with their own prime minister which is the highest office in the territory and also the head of territory. Besides Irdminians also other nationalities are living in the colonies, causing some problems in the past - especially in Fjofgrodt region where huge minority of Sunettians is living and Kykkia where local authorities and civilian people wants to break through and create an independent country.

For about 70 years of administration their relations with Irdminia was rather hard - in fact their independence was really close and many official strikes have been held - but were still represted by Irdminian government at the international area. Eventually, lately this trend started to change thanks to the new colony policy implemented by the Irdminian government, allowing citizens of overseas territories to enter Irdminia freely without passports. The biggest sign of warming relations was acceptance of one common currency and what's more important, one constitution ruling in all regions - both of acts came to force on 1st January 2014. However none of them is a full or non-full member of Internatian Free Trade Association (IFTA) or North Internatia Treaty Organization (NITRO) - organizations to which Irdminia belongs.

However, military services are provided by Irdminia only in case of intercontinental conflicts. For the rest of the time only 3 biggest territories are providing them for themselves and other, smaller colonies - it includes Kykkia (also sending services to Es Borfleari, Norvedtia and Onaro), Fjofgrodt (sending services to Cthopaaxi and Haafingkar) and Taltheis (which also provides militray services to Garrus & Afuna).

Other than that, all territories are represented by themselves on international cultural area, as they're taking part separately in most of the cultural and sport events among continents. Also, each region apart from using Irdminian language as an official one is allowed to use their own language which is the 2nd official one - both of them being teached obligatory in particular school systems. 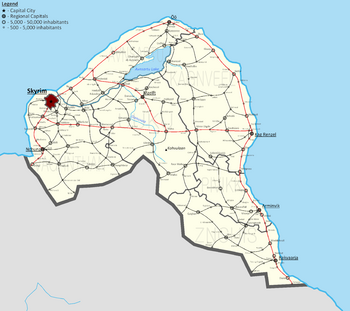 Cities and roads in Irdminia.

Irdminia's population density is one of the lowest in Internatia and is about 21.23/km² (55/sq mi). Most densely population regions are located to the west of the country, around the city of Wolfrim and to the east, around Arminvik.

Irdminians are very well known for their aversion to religion. About 96% of the country's population is Atheistic, only 2% are Catholic and 2% are other religions which are mostly the immigrants. However Irdminians are very tolerant, and any kind of religiuos discrimination is highly prohibited by the irdminian law.

Wolfrim, the capital of Irdminia is also its biggest, and most important city, located in the western coast. It is followed by an Arminvik on the east, which is named the cultural and educational capital of the country. 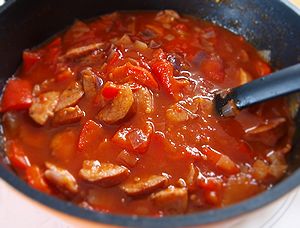 The cuisine of Irdminia consists mainly of meat, pepper, tomatoes and macaroni. Irdminian people love everything which is spicy, which differs them from other northern countries. Generally speaking, Irdminian cuisine is hearty. The preparation of traditional dishes can be time-intensive and Irdminians allow themselves a fair amount of time to prepare and enjoy their festive meals. In Irdminia, even a small, domestic meeting is worth spending numbers of hours to prepare relevant dishes.

The most popular dish in the country is Leczo, which is made of huge amount of pepper of any colour, tomatoes, sausage, onion, garlic with an addition of other meats and mushrooms. Every year in Kag Renzel at 11th of June, the "Papprikk Festvaali" is taking place, with stands serving different variants of Leczo being the main attraction. In 2010, Leczo made by 126 cooks was listed in the "Guinness World Records" book, as the biggest meal ever made by a human.

Irdminia has instituted freedom of press since the start od Irdminian television and radio. Nowadays, none of TV channels or Radio Stations is regulated by the government, yet the ITVR broadcaster (Irdminian Television and Radio) is considered as the national channel. It is a part of the IM group (Irdminian Media) the largest Irdminian media company, holding around 76% ownership interest as of December 2012.

Irdminia has a highly developed printed news industry, with daily newspapers like "Liiberizm" (Liberalism), "Turgdtu Saad" (The Daily Newspaper) and "Rwelthy" (Reality) which provides more sensationalist writing which is less current affairs orientated. In fact "Liiberizm" is the oldest publication and is still in operation today, founded in 1911.

Music diversity among Irdminian artists is very big. Composers like Raddko Pivri or Iad Werzche are very known across Internatia, even more than in Irdminia itself. In past, folk music was the most popular genre, with flute and pipes being the most used instruments which are now considered as one the national symbols.

As of 2012, all kinds of rock and folk music are the most popular genders in Irdminia, with a notable hip-hop and electro-pop influences, while all kinds of alternative music genres are encouraged.

Irdminia is taking part in Internatia Song Contest since its 7th edition. Despite rather poor results, the event is the most popular music show in a country, with shares at level of 80% in the night of the final. Since 9th edition, "Festvaali Muuzikg se Irdminch" (Festival of Irdminian Music) is organised, with every region sending their representative. In fact, the final show of Festival is considered now as a national holiday and it's the largest event in borders of Irdminia. With the international jury addition, it is also very popular in other countries in Internatia, being broadcasted live or a day after.