The Outernatia Song Contest 12 was the twelfth edition of the Outernatia Song Contest and took place in Hugo Chávez City, Lettuce. This was the first time that the Lettucian national broadcaster, Lettuce Broadcasting Corporation (LBC), are organising an OBU event. A record breaking twenty-eight countries participated, with two countries making their first appearance, and five countries returning. Almarania, however, withdrew with no further statements being given by their national broadcaster ARTV.

This edition was the last contest to take place on one evening. The Outernatian Broadcasting Union (OBU) revealed that it would be adding a two semi-finals show to the competition in order to accommodate the growing number of interested countries wishing to take part in the contest.[1]

For more details on this topic, see Hugo Chávez City and the host city. 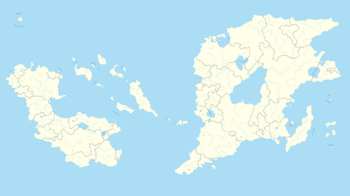 Noxus
The chosen host country is marked in green. Countries marked with red dots failed in their bids.

Following Noxus' win at the Outernatia Song Contest 10, the Outernatian Broadcasting Union had given the broadcaster BKR the first refusal to host the twelfth edition. However, on 28 June 2015, BKR declined the right to host the contest and offered to Lettuce, who finished second, the possibility to hosting.[2]

The Lettuce Broadcasting Corporation announced later that day that they accepted Noxus invitation to host the contest.[3] It will be the first time that the nation will have organised any OBU event.

On 1 July 2015, LBC announced that it had chosen Hugo Chávez City as the host city for the contest. The contest will be held at the newly constructed Revolution Arena, a multi-purpose indoor arena with a capacity for 35,000 spectators for sports and 20,000 for concerts.

Two countries made their debut this edition and five participants return to the contest, the highest number of returning countries to date. Almarania withdrew from the contest. The deadline to apply to participate was on 16 July 2015.[4]

On 28 June 2015, the OBU announced that it had invited Alteus to participate in the contest, represented by BovineTV, a long-time broadcaster of the OSC in the country.[5] Although Alteus is officially not eligible to enter, as only Outernatian countries can take part, the OBU proposed the participation of Alteus as a one-off event in response to the popularity of the contest in the country.[6]